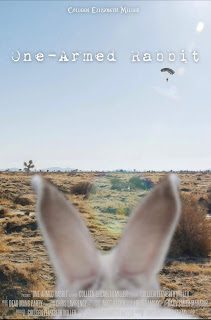 I’m always really happy when a killer horror short comes my way. Watching a good short film always makes me hungry for more. I just got finished checking out One-Armed Rabbit and I was super impressed. The visuals were really crisp and well done. I definitely got the sense of scale of being alone in a desert with no real hope of survival. Colleen really nails it with the acting and “self” harming which may or may not have been inflicted by an imaginary rabbit. Overall this was a really well done horror/comedy short that needs to be seen. So if you are in the mood for a bit of insanity  I highly recommend checking One-Armed Rabbit out when it’s released. I give this film a strong 8/10 🤘🦇🤘